THE TWO VIGILS -
A DREAM FROM THE LORD

In 2013, America marked the 40th anniversary of Roe v. Wade. We know the Lord's heart is broken over the millions of babies aborted in America.

But there are others for whom the Lord also weeps... The millions of women and girls who were and are abused and deceived. Staggering numbers of women — whether victims of sex trafficking, or victims of the leftist propaganda of this evil age — find themselves alone at an extremely vulnerable time in their lives. They’ve been lied to. They’ve been “counseled” that the child they carry is not quite human yet. It’s just a blob of “tissue,” to be dissolved back into the body. It’s not a real human baby; not a human being. It’s just a “fetus.”

Just kill it and get on with their lives.

These millions of women do not understand the impact of their actions. An increasing number of women abort/kill their own children because it is the norm. A whole generation has been indoctrinated by the devil. Fascinated by Hollywood, validated by leftist college professors. They are devoid of spiritual understanding. Right is wrong and wrong is right. Marriage is unnecessary, authority is disdained. They are clueless about spiritual things.

They are victims themselves and don’t even know it.

THE TWO VIGILS - A DREAM FROM THE LORD

THE FIRST VIGIL: In my dream, it was nighttime. The streets were filled with women. I lifted my eyes and saw a procession of women making their way through the city streets. They were marching right towards us.

As I watched, I realized it was a vigil. The closer they came, I could see that many were holding up placards and signs. And many others were carrying candles.

I was able to read two of the signs. One said: "For The Illegitimate Babies." The other: "For The Fatherless Babies."

These women were crying out for the Destinies of their children. Their babies had been born "out of season."

Instantly I understood... We live in a time when unprecedented numbers of children are being "born out of season." These are precious little ones, born to single moms. Or born to boyfriends and girlfriends who are not married. The children enter the world without the covenant protection of married parents. They are spiritually "uncovered," so to speak.

This was not a message of condemnation. It was informative. People need to know. Believers need to step up in compassion, and pray with spiritual understanding. Pray for the Destinies of the babies, and cover them with a mantle of God's Love. Love is able to COVER the multitude of sin.

THE SECOND VIGIL: It was the same scene – nighttime. I looked up and saw a second procession. The streets were flooded with women marching.

But this group was different.

They were walking more slowly than the first group. Some carried candles, but not as many. The women marched with their heads bowed down. Many were slumped over, almost bowed to the ground. Some were weeping, covering their faces. Some were praying and repenting to God. But ALL of them were filled with horrible grief.

There were only a few signs. Again, I was only able to make out two of them: "For The UN-Baby." And "For The Aborted Babies."

They were heartbroken - absolutely destitute and broken in spirit.

My heart broke for them when I saw them. And the Lord made me understand, they're looking for a safe place to find authentic help. They're looking for God! And there IS forgiveness and wholeness at the foot of the Cross!

The church world in general has treated these women the same way the Religious rulers treated the woman caught in adultery. They're hauling her up before Jesus and asking Him to judge her!

Jesus did not participate with those who exposed, accused and condemned her.

Not then. And not now.

We are anointed to heal the brokenhearted. We're called to introduce people to the only One who can actually cleanse and heal their hearts. How HE longs to gather them to Himself!

Sin has left its mark on every person on this planet. Yet many in the Body of Christ continue to target specific sins and demonize people in a way that shuts up the Kingdom of Heaven against them.

Jesus is still "writing on the ground with His finger." He still asks, "Woman, where are your accusers?"

A spirit of deception invaded the Body of Christ. A smug self-righteousness that actually thinks it's doing God a favor by casting the first stone! It’s a spirit called “Pharisee.” This is why the Lord cannot have His people represent Him with the condemnation and politics of men.

(The Lord spoke to me in a dream about this several months ago: "Pharisaical politics in the church world – in the Body of Christ – is currently the single greatest hindrance to soul-winning at this time." He shared His heart with me at length.)

THEN I SAW SOMETHING ELSE...

It was an army of women flooding the streets. In the daylight!

These women had had powerful encounters with Jesus! Many of them were still wounded in spirit, but they were beginning to hold their heads up. They had experienced the depths of His Love firsthand!

And I saw them taking to the streets with a powerful message of God's enduring Compassion to those still hiding in the darkness. The Sun of Righteousness is rising with healing in His wings...

I see the beginning of fulfillment of this dream coming soon. Let us not be blinded by Pharisaism, legalism and the bullying tactics of the past.

Let our hearts be open to the Father's powerful Compassion for the lost, and once again embrace the Great Commission: "Go into all the world and preach the Gospel – the Good News! – to every creature."

Yours in His Service of Compassion,

If this ministry is a blessing to you, please Donate today.
To become a partner with this ministry, click here. Thank you!

Back to Articles & Prophetic Words 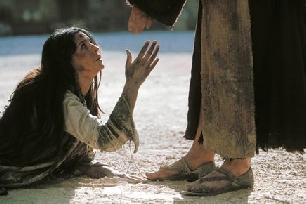